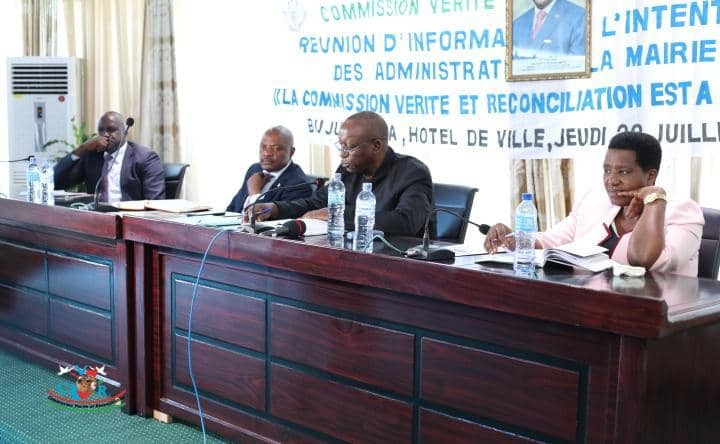 This Thursday, July 22, 2021, TRC (Truth and Reconciliation Commission) organized a meeting with the administrative staff of the City of Bujumbura to announce the official launch of its work in the economic capital of the country, on Tuesday, July 27, 2021. An opportunity for the population of Bujumbura to finally be able to express themselves on the human rights violations committed in 1972 in Bujumbura and the concerns related to the work of the TRC.

The population of the city of Bujumbura had long wanted the TRC to arrive at their home, said one of the people present at the meeting held in the mayorship. His intervention followed a call from the Mayor of Bujumbura, Jimmy Hatungimana, as everyone was reluctant to speak first to give his opinion.
Some have expressed a widespread view that the TRC works on behalf of the ruling party. Others felt that the Commission would only work on the 1972 crisis which caused the death of a large part of the Bahutu people.

Another opinion considers that the Commission is slow to investigate the Batutsi victims who have been swept away by other crises. However, others said they have already understood that the TRC is a neutral Commission that must work on the various crises the country has gone through.

They hope that the work of seeking the truth about the human rights violations committed in Burundi will also cover other events that have affected the life of the country, as all Burundian ethnicities have been victims of the cyclical crises that the country has suffered.

On the other hand, others see that the process of seeking the truth to proceed to reconciliation leaves a lot to be desired because, until this moment, there is a category of people who do not want to cohabit with others. An example was given in the case of displaced people from Ruhororo commune in Ngozi province who are struggling to live on their own.

There are others who have not yet understood the mission of the TRC and that the continuity of the State must prevail, in particular, to move on to the stage of reparations in favor of the families of the victims of the 1972 crisis. Others said they recognized that the mission of the TRC is very difficult to achieve and encouraged the whole Commission team.

This is evident from the explanations provided by the chairman of the TRC for any concerns raised by the meeting participants. For him, the particular emphasis of the Commission’s mission was placed on the 1972 crisis because it was the first to unfold across the country and which claimed many victims. In addition to that, the choice of the year 1972 was not at all a coincidence: « the witnesses of this crisis disappear without leaving testimonies on this very painful period for the country », he said.

For those who think that the TRC is working in the interest of a single ethnic group, Amb. Pierre Claver Ndayicariye recalled that the mission of the TRC extends from 1885 to 2008 and that this period includes a large part of the crises that the country has known.

Thus, the President of the TRC asks the inhabitants of the city of Bujumbura who can testify on the crisis of 1972, to approach the Commissioners and Executives of the TRC so that the truth is finally revealed. In addition to this, the TRC will soon make a toll-free number and a suggestion box available to the public in order to have a large part of these testimonies available.

On the other hand, certain inhabitants seem to hasten to know the qualification of the crisis of 1972. They do not hesitate to say that it is a crisis which had been well prepared and that some of the responsibles are already known. They believe that reconciliation would never exist until these alleged perpetrators are revealed.

It should be noted that during this meeting, the participants asked the TRC to organize seminars for widows and orphans of those crises so that they may be comforted. A documentary video showing the activities carried out by the Commission in 2020 was screened in order to show city dwellers the work of the TRC in this process of seeking truth in the service of reconciliation.