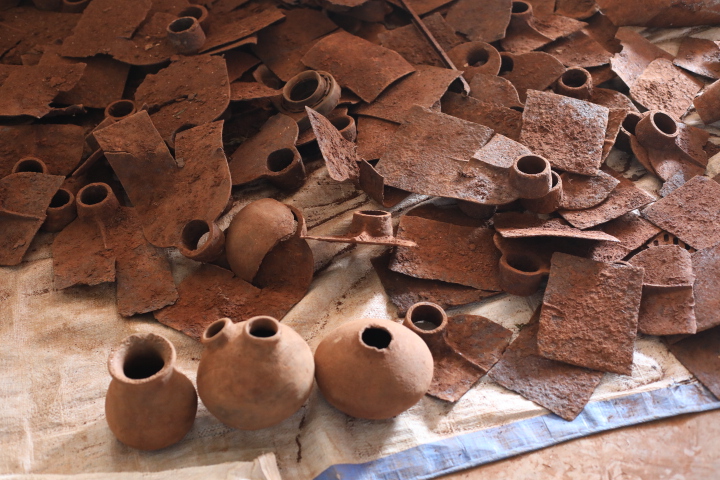 Buhinyuza’s mass grave exhumation activities have raised concerns. The number of victims exhumed in the first two mass graves being 129. In the third mass grave, the discovery is rather fascinating: worn hoes, a boar skeleton, and jugs. The Commission is surprised and deepens the investigations.

In the province of Muyinga as everywhere else in Burundi, in addition to intellectuals and wealthy people, other people were arrested during the crisis of 1972. But the peculiarity in the north is that Bahutu were arrested and killed, accused of witchcraft, according to the testimonies collected in particular in Buhinyuza commune.

The victims were summoned by Rucumuhimba Laurent, communal administrator of Buhinyuza. The most delirious is this accusation leveled against a victim who would have, it is said, « considered bewitching the son of President Micombero », a purely political strategy of eliminating populations, explain the families of the victims and survivors of the 1972 crisis in Buhinyuza.
These witnesses say that those arrested for witchcraft were taken directly to the communal office with their fetishes (jugs,…) to be able to defend themselves in front of Rucumuhimba. But no one returned because there was no way to escape the wrath of Kibwa Bonaventure, nicknamed MP, but who was a very influential UPRONA party official and worked hand in hand with Revolutionary Youth activists of Rwagasore (JRR) to exterminate Bahutu intellectuals. The detainees were tied up, beaten, killed, and thrown into mass graves.

During the verification activities of the third mass grave of Buhinyuza, a skeleton of a boar (ingiri) was exhumed as well as a multitude of used hoes. The role of these hoes in the communal office worries the population in general and the CVR in particular. According to the sources, they were used to kill the victims or by the detainees in the exploitation activities of the public domains, in particular those of the prison of Buhinyuza.
A donation from the Red Cross to Rwandan refugees?
Other witnesses have advanced another thesis. These hoes were given to the more than 5,000 Rwandan refugees residing at Nyarunazi camp after fleeing the 1959 crisis in Rwanda. Arrived in Burundi, these Rwandans were able to benefit from material assistance in hoes for each family to be able to survive and operate the fields. And each time a hoe was worn out, it had to be returned to the commune office for another in good condition. And the used hoes would have been thrown into a pit. In 1972, the Buhinyuza mass grave was only a gutter for the retention of wastewater and garbage from the prison, witnesses explain.

On the other hand, sources collected at the Nyarunazi site confirm unequivocally that the Rwandan refugees from Nyarunazi participated in the massacres of the 1972 crisis. Indeed, the sources say, the Rwandans felt close to Micombero’s power. During the crisis, they were called in Mwakiro to reinforce, in particular, to throw the bodies of the victims into the Musenga mass grave after being massacred at the Buhinyuza communal office.
Likewise, witnesses still claim, the same Rwandans from the Nyarunazi camp participated in the commission of crimes against victims who ended their lives in the mass graves of Buhinyuza. One of the witnesses told the TRC that he heard young Rwandans bragging about in a bistro that they had worked a lot the night before to free themselves from the traitors: « Turarushe, twaraye twikuye abamenja kw’ikomine Buhinyuza ».